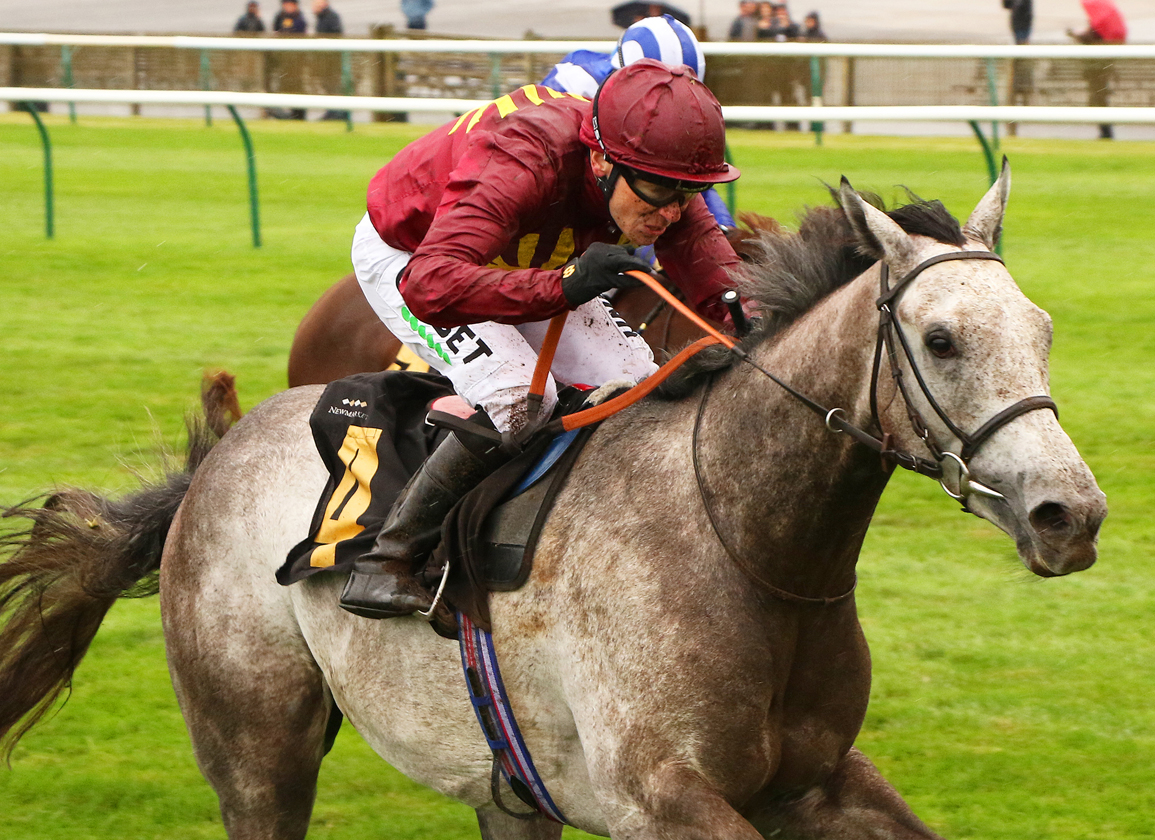 Newmarket’s Sun Chariot card was a breeding ground for emerging talent on Saturday, with the MansionBet Best Odds Guaranteed EBF Maiden S. the scene of the arrival of another TDN Rising Star in Earle Mack’s newcomer Cash (Ire) (Shamardal). Sent off at 8-1 for his debut in this mile contest, the grey broke slowly before being held up by Jamie Spencer in rear throughout the early stages. Threaded up the rail to enter contention approaching two out, he had three lengths to make up on the 11-8 favourite Al Nafir (Ire) (Dubawi {Ire}) there but produced a telling surge to cut back the deficit in just over a furlong. Overwhelming that full-brother to Ghaiyyath (Ire) with 150 yards remaining, the David Simcock-trained newcomer finished off strongly to deny the Godolphin blueblood a winning debut by 1 1/2 lengths as the 50-1 shot Laatansa (Fr) (New Bay {GB}) ended up a neck back in third.

“He is a big horse, but he did everything right today and he is a nice prospect for next year,” Simcock said. “The mare stayed a mile six and he’s drifted through his work at home and has never got tired, which is a good sign for me. He is a big, strapping horse and he has sustained his run today. We don’t get that many of that make of car, so it is nice to find one! If he got there today great, but if he didn’t there then there was always going to be another day. It can make life harder when they win first time out and I don’t think he will be doing anything else this season. He’s a horse we like and is talented–we’ve found some nice 2-year-olds this year and ten furlongs will be the starting point for him next year.”

Spencer was impressed and said, “It’s difficult to do what he did on this racecourse first time out–I wanted to get him in and to relax and heading to the two I thought he’d be fourth, but he took off and got to the front and idled. I’d ridden him in March before David bought him and loved him the first day I sat on him. I’ve ridden him a good bit at home and he’s an exciting horse. David doesn’t train them to peak first time out and he’s a beautiful horse and very comfortable to ride–he skips over the ground. Sometimes the dip here can feel like a roller-coaster, but on him it felt comfortable and generally a good horse gets in and out of the dip easily here. He should stay at least 10 furlongs next year and if he stays a mile and a half it puts him in another stratosphere. I’ve been looking forward to him running for a month now and told my agent that wherever Cash runs I’m going there to ride him.”

Cash, who is the 12th Shamardal to attain TDN Rising Star status, is out of Lady Rosamunde (GB) (Maria’s Mon) who was a useful handicap winner over 14 furlongs. She is a daughter of the Listed Prix de Thiberville winner and G3 Lancashire Oaks runner-up String Quartet (Ire) (Sadler’s Wells) and is therefore a half to the G2 Park Hill S. scorer Meeznah (Dynaformer), who was disqualified after finishing a neck second to Snow Fairy (Ire) (Intikhab) in the 2010 G1 Epsom Oaks. Also a half to the G2 Princess of Wales’s S. runner-up Shahin (Kingmambo), String Quartet is the second dam of this year’s G1 Allan Robertson Championship winner Under Your Spell (SAf) (Capetown Noir {SAf}). This is also the family of the GI Canadian International heroine Sarah Lynx (Ire) (Montjeu {Ire}). Lady Rosamunde has a yearling full-sister to Cash and a colt foal by Exceed and Excel (Aus) to follow.